The Bulldogs blasted the Meridian Trojans 58-14 to advance to the State Quarterfinals.

Montesano’s defense was stifling all night and they wasted no time getting going on offense as Trace Ridgway and Sam Winter hooked up for TDs on their first two offensive plays of the game.

The first one was from 52 yards out on a swing pass to Winter and the second came when Ridgway faked like he was going to run around the right side before he bombed it down the sideline to Winter for the 54 yard score.

After another stop on defense, the Bulldogs drove down the field but were held to a 21 yard field goal by Jordan King, making the score 17-0 with 1:23 left in the first quarter.

Meridian answered with a 68 yard TD pass that ricocheted off a couple players before landing in the hands of Ethan Silves who streaked down the left sideline for the score.

They converted the extra point making the count 17-7.

Monte drove down later in the half and lost King, who is also their starting Tight End, to an ankle injury in the red zone.

With their kicker out of the game and facing a fourth and goal from the 13 yard line they reached into their bag of tricks and found the hook and ladder to Aydan Darst.

Konnor Odekirk came in to do the kicking and knocked the extra point through making the score 24-7 with 5:42 remaining in the half.

Montesano’s next drive stalled again but the Trojans misplayed the booming punt from Tanner Nicklas and the Bulldogs recovered at the Meridian 23.

Monte went back to Winter as Ridgway hit him for a ten yard TD pass.

Trojans back up QB Wesley Kurz, who was playing for Cameron Webster who went down with an injury in the first quarter, was intercepted by Braden Dohrmann.

That gave the Bulldogs the ball back with about :35 seconds left at the Meridian 34.

The Bulldogs took advantage with Ridgway and Winter connecting for their fourth TD in the first half, this time from seven yards out.

Odekirk missed his only extra point on the night making the score 37-7 with just :02 remaining.

After the break, Ridgway would only throw three more passes, only completing one of them for negative 2 yards, and being intercepted on another.

But the junior QB started running the ball and chewed up yardage on the ground.

The Bulldogs starters scored two more TDs in the second half one on a nine yard carry for Brent Hollatz with 6:47 left in the third to make the score 44-7.

Then Ridgway broke free and engaged the running clock with a 58 yard run.

Dohrmann then nabbed his second interception of the game and set up the second unit for a scoring opportunity.

Back-up QB Isaac Pierce proved up to the task and got the Bulldogs to the one yard line, then Odekirk punched it in for the score.

He added the extra point, making the count 58-7.

Meridian didn’t quit and they drove down and scored on a three yard TD run by Trent Martin, making the final tally 58-14.

Montesano then handed the offense to the freshmen players who ran out the clock and gained eight yards in the process, all of which by Ethan Blundred.

Montesano will now take on Deer Park who knocked out Zillah.

That game will be at Jack Rottle Field on Saturday at 2:00 p.m.

The Players of the Game were both Sam Winter and Trace Ridgway who shared the honor as they also shared the MVP award for the Evergreen 1A League.

Winter finished with five catches for 132 yards and four TDs.

Ridgway was 8-14 passing for 173 yards and five passing TDs (if you count the hook and ladder, still not sure how to score that one correctly).

He also added 17 carries for 149 yards and rushing score. 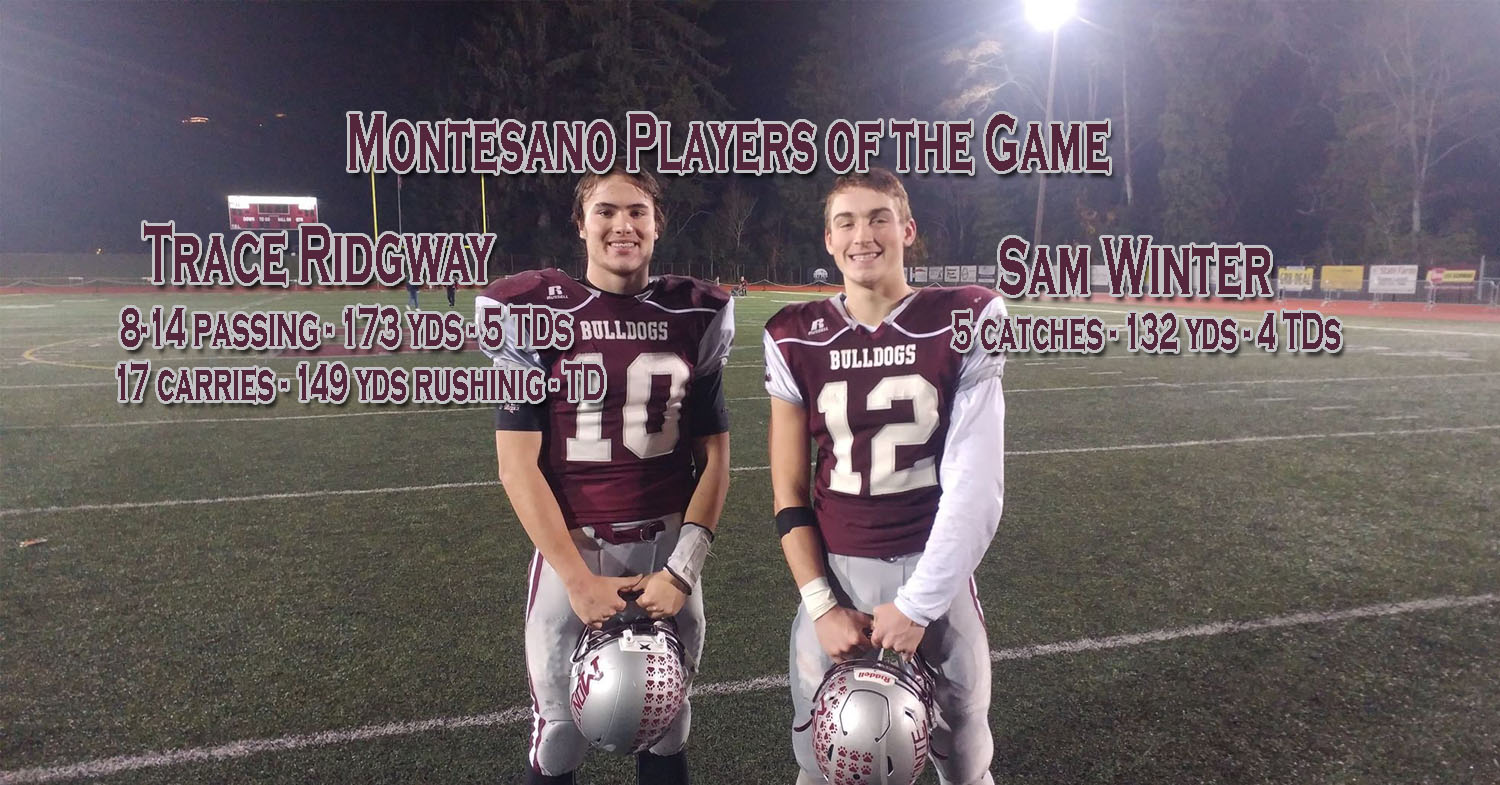