Elma, WA – The Montesano Bulldogs finished their regular season 9-0 and they notched another dominant win on Friday night.

The Bulldogs took down the Elma Eagles 49-7 at Davis Field and locked up the Evergreen 1A League Title as well as an unbeaten and basically untouched regular season.

This season, Montesano outscored their opponents 476 to 45, averaging over 52 points per game.

They only allowed five points per game against them, tallying four shutouts along the way.

The only way to describe their year so far is dominant.

On Friday night in Elma it was more of the same as they forced the Eagles to punt after three plays and then scored on their own third offensive play of the game.

A catch and a long run by Jordan King set up a one yard touchdown run for Trace Ridgway, previewing things to come.

Ridgway would run for another TD in the first quarter, this time from five yards out, making the score 14-0.

Then Elma would go on their second best drive of the night.

The Eagles ground their way down field using 16 plays and taking over six minutes off the clock, but they fumbled the ball away inside the Monte 20 yard line.

Elma’s defense then stopped the Bulldogs but punted the ball back after just three plays.

Montesano wasted no time getting back to the endzone as Ridgway broke through for a 63 yard TD run right down the middle of the field.

Sam Winter then snagged an interception on Elma’s ensuing drive setting up the Bulldogs again.

Montesano found pay dirt again this time it was Winter who scored on a six yard reception from Ridgway making the score 28-0.

The Eagles then got the big play they needed.

Running Back Isaiah O’Farrill broke free and sprinted for a 58 yard TD run for Elma’s lone TD of the night.

Montesano would answer right back however, with another short TD run by Ridgway.

This one was set up by another long reception by King.

The Eagles found no relief in the second half as the opening kickoff was returned about 90 yards for a TD by Braden Dohrmann, giving Monte the 42-7 lead.

That was the only score for the Bulldogs that Ridgway did not have a hand in.

Another Elma Punt sent the ball back to Montesano.

They again took advantage with Ridgway tossing a 10 yard strike to Brent Hollatz for the final score of the night with 4:52 left in third quarter.

That TD made the score 49-7 and put the running clock into motion.

He finished the night with four rushing TDs and two passing scores.

O’Farrill had a strong night for the Eagles with 134 yards rushing on 18 carries and a TD.

Stay tuned for our playoff match-ups as we figure out which games we will cover on 1490 AM and live online right here on 1490kwok.com. 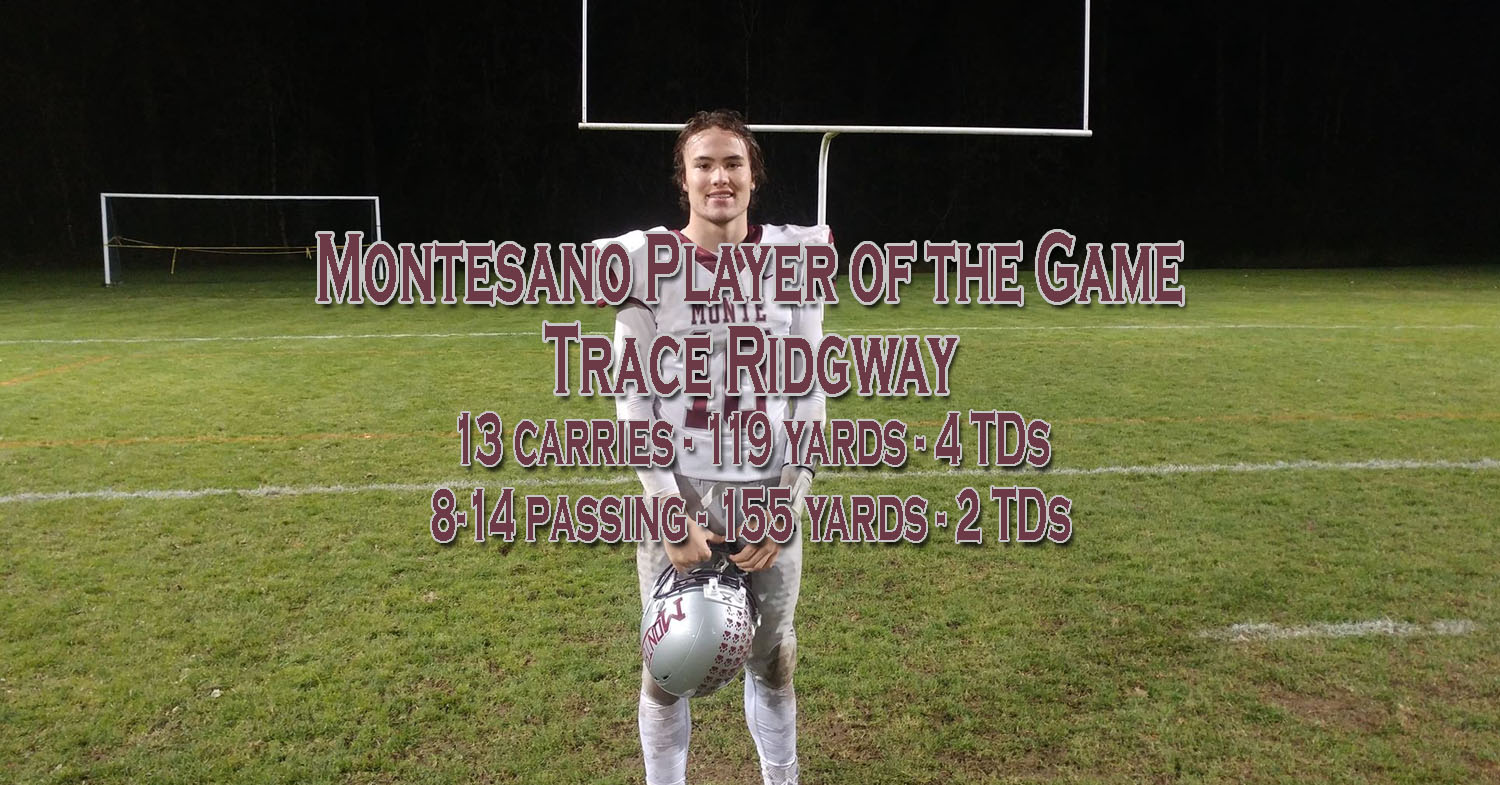