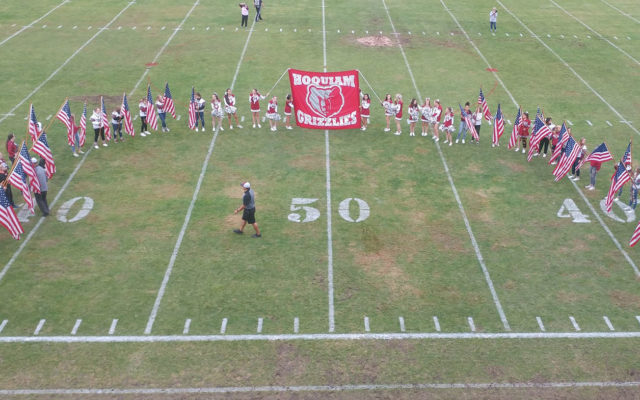 They beat the Aberdeen Bobcats 56-3.

After Aberdeen’s opening drive, where they drove methodically down the field and got a 29 yard field goal from Giovanni Pisani, it was all Hoquiam.

Ben Estes scored on the first play from scrimmage for Hoquiam with a 64 yard touchdown run.

The Grizzlies scored touchdowns on all six of there first half possessions and went into half time with a 42-3 lead.

In the second half they finally faltered.

Hoquiam lost a fumble after a big hit by Aberdeen’s Dylan Richie, but even after a fairly long return by Connar Sherman they were unable to find points.

Hoquiam would then tack on two more TDs in the second half for the final.

Hoquiam was led on offense by Malaki Eaton who had 9 carries for 177 yards and 2 TDs.

Estes also ran for 154 yards on 8 carries and his one TD.

Quarterback Dane McMillan scored on two one yard QB sneaks and he was 4-6 with 86 yards and a TD passing.

Receiver Cameron Bumstead had all of Hoquiam’s  5 receptions with 140 yards and 2 TDs catching one of them on a trick play from Cayden Kempf from 54 yards out.

Matt Brown scored the remaining Grizzly TD and he totaled 59 yards on 6 carries.

For Aberdeen Ethan Morrill ran very hard and had 7 carries for 55 yards.

Elijah Brown was 8-16 with 85 yards passing for the Bobcats.

All stats are unofficial.