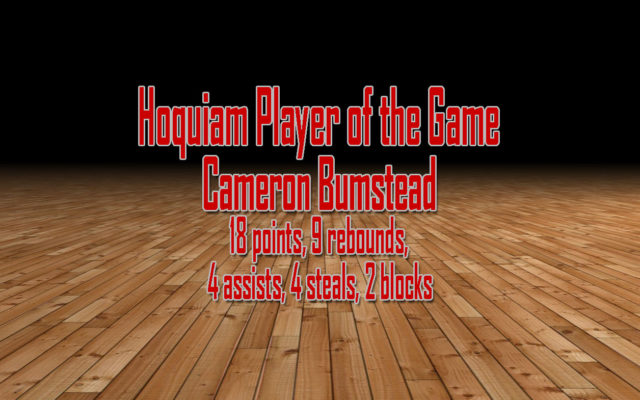 Elma, WA – The Hoquiam Grizzlies found themselves down early in the first quarter and they had to work to come back through out the game vs. the Elma Eagles on Friday night in Elma.

The Grizzlies and Eagles battled closely the entire night, but in the end it was Hoquiam who held on for the 52-50 victory in an Evergreen 1A League match-up.

Elma started off the game red hot from the outside and used four 3-pointers in the first quarter.

Hoquiam withstood the barrage though and kept the quarter close with the Eagles leading 16-14 at the break.

The second quarter continued the back and forth style and Elma’s Brady Johnston led all scorers at the half-time break with nine points.

After a 9-9 second quarter the half-time score showed Elma leading 25-23.

Hoquiam struck early in the second half with their only 3-pointer of the night and it came from Cameron Bumstead.

The game continued to seesaw in the third but the Grizzlies gained ground and the game headed to the fourth period tied at 37.

The final frame proved just as tight as the first three with each team making big shots.

Elma worked to a six point lead when Kempf again provided a spark on back to back possessions for Hoquiam.

Hoquiam would then draw within one on a jumper from Garrett Dick and then Bumstead gave them the lead with a shot that took some time falling through.

Kempf then fouled out, finishing with 11 points which was the second highest total for the Grizzlies.

The foul sent Johnston to the line for a one and one opportunity and he knocked down the first one to tie the game but couldn’t get the second to fall.

Cobey Moore then fouled out for the Eagles sending Dick to the free throw line.

He would miss the front side of the one and one however and the game remained tied.

After a scoreless possession from both teams it was Raiden Aho coming up big for the Eagles.

Bumstead would knock down two free throws on the next possession to make the score 48-47 Elma.

After a Hoquiam stop, Zach Elsos scored on a driving right hander from the left side to give the Grizzlies the 49-48 lead with about 1:20 remaining.

Nick Church answered right back for Elma with an acrobatic driving lay-in to give the Eagles the lead back.

Bumstead was the fouled again and he again delivered two clutch free throws to give Hoquiam the lead back at 51-50 with 31.5 seconds left.

Bumstead then blocked Elma’s go ahead shot attempt on the next possession and Elsos recovered the loose ball and was fouled with 19.8 seconds left.

Elsos missed the first and made the second free throw to give Hoquiam the lead at 52-50 and they then survived a last second shot attempt to hold on to the win.

Bumstead was our Player of the Game for his game high 18 points and he also added nine rebounds, four assists, four steals, and two blocks.

Catch the post game interviews with Bumstead and Kempf below.