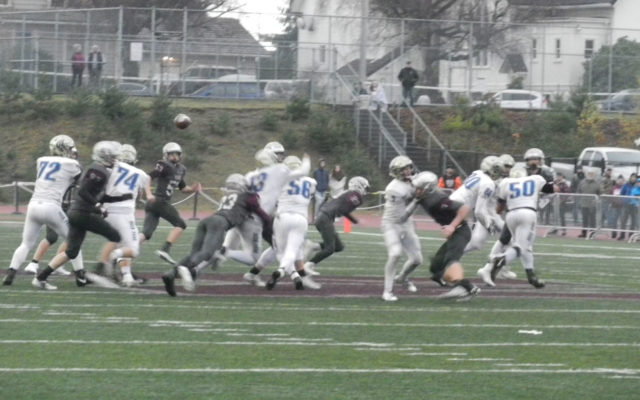 Montesano, WA – The Montesano Bulldogs fought valiantly in the second half but came up just short in their State Quarterfinal match-up with Deer Park.

The Stags held on to advance to the semifinals with a 20-17 win on Saturday at Jack Rottle Field.

It was a first half of what could go wrong did go wrong for the Bulldogs.

The worst thing that went wrong was the injury to Evergreen 1A League Co-MVP Sam Winter.

On the opening drive of the game Montesano was down in the redzone and Quarterback Trace Ridgway threw a pass to Winter in the endzone that was knocked away.

Winter made a diving attempt at it and stayed down after the play.

He was able to walk off the field under his own power but did not play on defense.

On the Stags opening possession, their league MVP, Matthew Jorgensen, broke free and used his lightening speed to outrun the defense for a 72 yard TD run.

The extra point was knocked through, making the score 7-0 with 5:38 remaining in the first quarter.

Winter then went out to return the kickoff and try to play through his injury.

He caught the kick and fell to the ground after trying to take his first step, ending his night.

The Bulldogs rallied and drove down the field but were again stopped in the redzone.

Jordan King converted a field goal though to make the score 7-3 with 1:10 left in the first period.

Deer Park answered again with a 41 yard catch and run on a screen pass from Chaz Bird to Bennett Lim.

The extra point was missed making the count 13-3.

Then at the end of the half the Stags recovered a punt that bounced off the Montesano returner as it skipped along the ground.

Deer Park took advantage with a 12 yard TD run by Jorgensen and the extra point was converted making the score at half time 20-3.

The Bulldogs came out of the break with resolve and their defense was rabid.

The Stags punted on all of their offensive possessions in the second half, save for one.

On that drive Montesano forced and recovered a fumble.

Isaac Pierce entered the fold for the Bulldogs offensively and broke free on their first drive of the second half for a 42 yard run which set up his own two yard TD run.

King converted the extra point to make the score 20-10 with 3:11 left in the third quarter.

Deer Park’s defense then stopped Montesano on their next two drives but that fumble led to the Bulldogs getting back to the endzone.

Braden Dohrmann opened the drive with a trick play pass to Ridgway who made an outstanding catch for the first down.

Brent Hollatz then added a big run to get the Bulldogs into scoring position.

Then it was Ridgway who willed himself to the goal line and dove across for the 12 yard TD run.

King again knocked through the extra point, making the score 20-17 with 6:31 left in the game.

Montesano got the ball back after another Deer Park punt.

They converted on fourth down, but then on a later try they were stopped and turned the ball over with 1:59 remaining.

The Bulldogs only had one time out left but their defense held again and Monte got the ball back with :13 seconds left.

They needed a miracle and after two plays, their prayers were left unanswered as time ran out.

Our Montesano Player of the Game was Trace Ridgway as he ran for 99 yards and a TD on 19 carries and he completed 12 passes for 92 yards.

Ridgway also played well on defense along with the entire defense.

The Bulldogs finished the year 10-1.