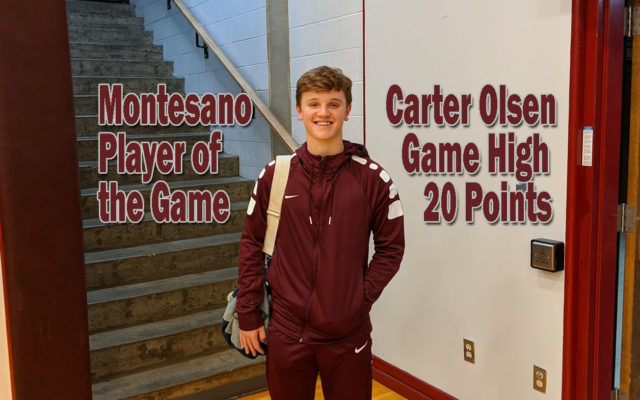 Hoquiam, WA – The Montesano Bulldogs caught fire in the third quarter and torched the nets to power them to a 5-0 start in league play.

The Bulldogs outscored the Hoquiam Grizzlies 29-12 in the third frame and rolled in the fourth for the 71-42 victory.

The first half was played in back and forth fashion with Montesano taking a 16-12 lead after the first and then they used an 8-0 run to regain the 26-22 lead at the half.

Carter Olsen had already drilled two 3-pointers in the first half before knocking down three in the third quarter alone.

Montesano also got three balls from Wesley Bjornsgard, Cole Daniels, and Braden Dohrmann in the period.

The scoring outburst by the Bulldogs gave them a 55-34 lead going into the fourth quarter.

Montesano cruised in the final period for the 71-42 final.

Olsen was our Player of the Game for his game high 20 points.

Dohrmann followed with 11 and Daniels added 10 for the Bulldogs.

Hoquiam was led by Cameron Bumstead who had 11 despite fouling out early in the fourth and Zach Elsos added 10 in the losing effort.