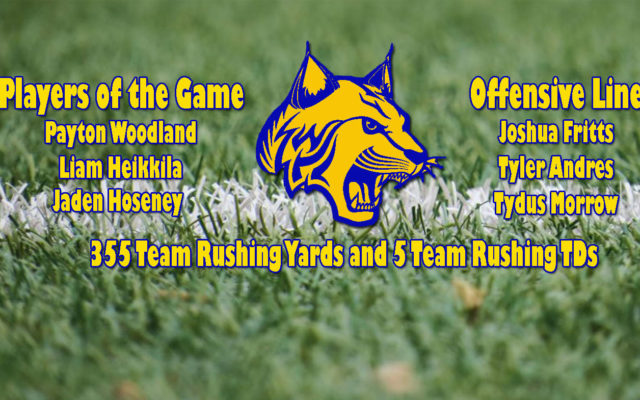 Aberdeen, WA – The Aberdeen Bobcats ran over the Centralia Tigers in their league opener on Friday night at Stewart Field.

The Bobcats ran for 355 yards and five touchdowns as a team to beat the Tigers 46-30 on homecoming night.

Aberdeen opened the game in impressive fashion as they took their opening drive 78 yards down the field, using 17 plays, and taking over nine minutes off the clock.

They ran 16 times in a row on the drive and then capped it off with a beautiful play-action TD pass from Elijah Brown to Morgun Morrow from ten yards out.

The Bobcats got the 2-point conversion on a throw from Brown to Tydus Morrow to make the lead 8-0.

Centralia then fumbled on their ensuing drive on the last play of the first quarter and the ball was recovered by Aberdeen.

The Bobcats took advantage of the turnover and again marched down the field, this time punching it in from 44 yards out on a TD run by Connar Sherman.

They again converted for two to give them a quick 16-0 lead.

The Tigers would then bounce back and score on their next two drives with a stop of Aberdeen in between.

They also converted both of their 2-point tries to tie the game at 16 with 1:27 left in the first half.

The Bobcats answered in a flash with a one play drive.

Dylan Richie, who was starting his first game at Full Back this year after playing on the offensive line, took a hand-off and raced up the middle for a 79 yard score.

The Tigers again showed that they could score quickly however, as they scored on just three plays capped by a 39 yard pass from Cameron Erickson to Blaine Wass.

They tried to kick the extra point for the lead but missed making the half time score 22-22.

The second half belonged to the Bobcats and Ethan Morrill.

Morrill ran for the three straight TDs capped by this run from 9 yards out to start the fourth quarter.

Aberdeen also converted on all their 2-point conversions in the second half, which proved key down the stretch.

With the score 46-22 the Tigers looked to be mounting a comeback that started with a 12 yard TD run by Chase Sobolesky-Reynolds and Braidyn Hoyt converted the 2-point try.

But after the Bobcats stalled on offense, Centralia could not complete a drive that went deep into Aberdeen territory.

Aberdeen got the ball and ran the clock down to :39 left before a fumbled snap gave it back to the Tigers, but it was too late.

The Bobcats were led on the night by Morrill who ran for 170 yards and three TDs on 30 carries.

After the contest, we awarded the offensive line as the players of the game with a nod to the tight end as well.

Centralia was led by Hoyt who had a great night with 22 carries for 223 yards and a TD.